‘Of babies whose mothers take Sodium Valproate (Epilim) during pregnancy, up to 1 in 10 (10%) are at risk of having a birth defect, and up to 4 in 10 children (40%) have problems with development and learning as they grow.’
Epilepsy Society

At the age of 19, I found out I was pregnant and was left terrified and wondering if I should even continue with the pregnancy. It took a lot for me to turn round and decide firmly on a yes, now I couldn’t be happier that I did. I was lucky for the most part, O was fortunate. From birth we knew there were no deformations, Spina Bifida or a Cleft Palate. However, as he grew we did notice he was on the slightly smaller side, but we dismissed it. Some children just are smaller!
But it wasn’t long before we realised the delayed walking and talking were going to be issues. It wasn’t until he was 10 months old that he started crawling properly. Friends who had had children after me were constantly posting their babies ‘achievements’ on Facebook, whilst I sat with my little ginger Gremlin praying he would achieve the same goals soon. I knew I wouldn’t love him any less, but obviously like every mother, you want them to accomplish the simple abilities. By Christmas he was, at last, crawling, the joy and frustration this simple task brought to me was beyond anything I ever would have imagined.
Shortly after his first birthday he started to stand, and by May, 15 months old, he was finally walking. He was so proud of himself, let alone how proud me and Rich were of him.
When O was 21 months old he finally had a consistent 5 word vocabulary – Yes, Shoes (Meaning both shoes and socks, no matter how many times I tell him), Mum, Dad and Trees. We always did everything we could to help him catch up. When he was learning to crawl, he started off commando crawling, or, slithering like a snake would be an apt description. This method may not have been the desired way but he was mobile! At the time he was obsessed with the sound of paper being crinkled, weird right? So we used to sit about a foot in front of him, on the floor, and crinkle paper like our lives depended on it. The things you do for your children.
We moved from Pembrokeshire up to Rhondda March 2016, it wasn’t until we were here and had met our friends, that O started attempting to stand on his own. I didn’t do an awful lot to encourage his walking, he picked it up on his own, but I strongly believe it had a lot to do with copying his new little friend. Only 2 months older than O but already running races. The bond between them seemed to be instant and thick as thieves. 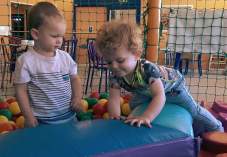 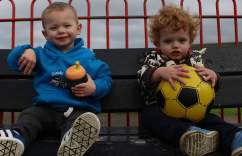 My little Gremlin has always been classed as ‘behind’ in his milestones. But, recently he seems to be picking everything up.

We went to Barry Island beach on Monday, where he loved being chased by the waves, and playing football (he is kicking a ball at long last, much to Daddy’s delight). We planned to try potty training in the summer anyway, but he keeps saying “poo” now and backing up to us with his bum sticking out. Now, most of the time it’s just a fluff but he’s getting the right idea already :).

When we got home he was so exhausted, but he still had to climb the stairs to bed himself. He even walks down them now 😱. 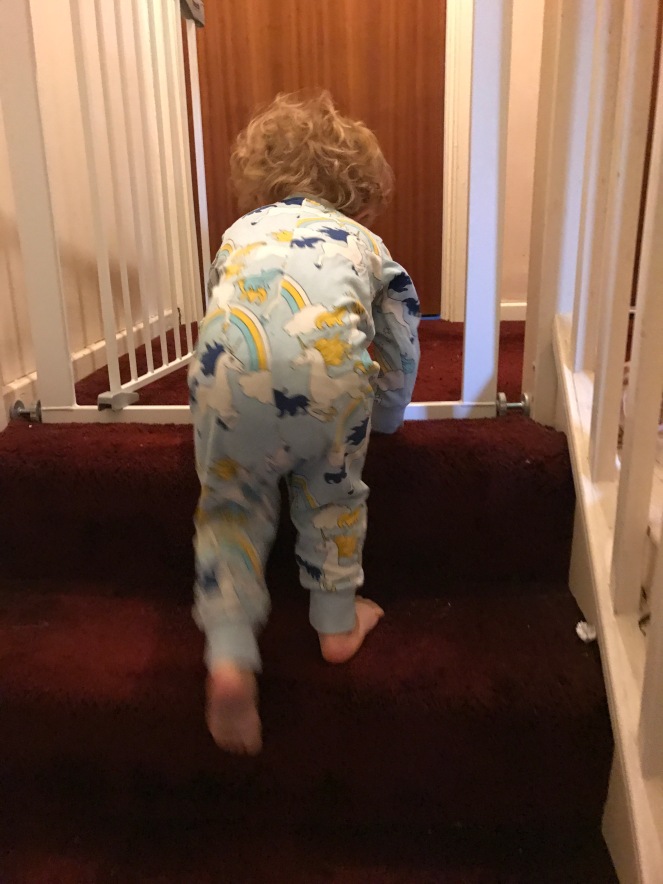 But, the most impressive thing? His speech. It has improved so much since December. Whilst out with friends today (mine and his all of a similar age) he picked up 4 new words!
“Door”
“Peekaboo”
“Hiya”
“Cheese”
All of which he has never said before and he heard his friends saying. Definitely a proud mama moment despite the other cheekiness. One day soon, I reckon he will just randomly come out with a whole sentence.
It was a similar case as last year, copying from someone his own age to accomplish his milestones. I don’t doubt he can do anything he sets his mind to, I think he just can’t be bothered. Not until he realises others are doing it, so maybe he should join in.

I was never worried when he was delayed though, he didn’t crawl until around 10 months and didn’t walk until a few month after he met K at about 15 months.
Every health visitor, I’ve found, says different things. Mine gave me a bit of a disdainful look because he isn’t potty training yet! 😱 I mean, come on, he’d just turned 2 when she visited. Yet, both K and E’s health visitors are fine with them and they are 2 months and 5 months older than him. 😒 sure. Makes sense.

Never worry about milestones, some hit them early, on time or even late like O. Some, unfortunately don’t ever hit certain ones. Doesn’t mean they are any less special, bright, clever or loved.

Don’t sit there worrying yourself ragged because your little one is nearly 3 and still not talking. So what, you aren’t at them same level as everyone else for EVERYTHING. Some things you NEVER will be, just like them.
Enjoy them, whilst they are still young. Don’t go wishing their youth away because you “can’t wait to see what their first word is” or “really want them to walk”. They will do it when they are ready, not when you are. Believe me, you are NOT the only mama or daddy to have said it, nor will you be the last.

Make the most of these precious years, you know, the ones where they actually want to spend time with you and don’t mind being seen (in public!!) with you.