Today, we went to visit Cefyn Mably farm in Cardiff.

We went during school holidays so it cost £6.50 per person (children and adults are the same price), instead of the usual £4.50. We also brought, 4 bags of pellet feed, and a pony ride for both the little Gremlins at the cash desk.

The farm was a decent size, with plenty of pens full of sheep and pigs. Although we didn’t see the pigs, the sheep were eager for some food from our brown paper bags. The animals were definitely used to awkward little hands hiding pellets of food in them, both the boys (aged 2) loved feeding the sheep.

The farm also had plenty of hutches full of adorable bundles of fluff. Both O and K loved the Guinea Pigs and Rabbits, watching them with avid fascination. Naturally, when we showed them they could actually hold one, they were more than willing (O more so. K is a tad too inpatient).

The petting area, a square of hard wooden seats, was full of other excited children, all agitatedly waiting their turn for the magical, ratty old towel, followed by a laid back, hungry, bored animal to stroke. 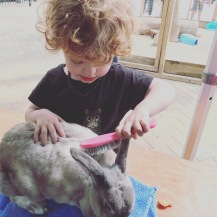 Now, you may remember me saying, we brought a pony ride for both boys. The que for the this was ridiculous. Personally, I think they should have given everyone a time slot, as they purchased their ticket. I ended up stood in the que, (on my own), for 45 minutes. The boys got bored, and I don’t blame them, so they went off and carried on feeding the lovely sheep and ponies. Eventually, I was the next in the que so I called them all back over, and, you guessed it! Neither of them wanted to get on the flipping ponies! What a waste of 45 minutes of my life. I think they need to rethink their approach to that certain activity. 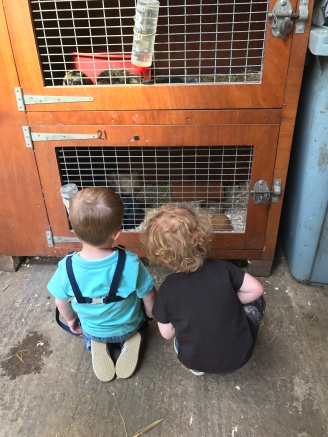 We called the animals a day after that (we didn’t visit the reindeers who seemed to be penned out of the way). The boys decided to have a bit of a run around in one of the various parks outside with the picnic areas, followed by a quick tumble in the soft play area. The soft play was much bigger than I thought it would be, but, as you can imagine, was very busy. By the time us Mamas had finished our cups of tea Gremlin 1 & 2 had pretty much exhausted all of their energy and were ready to go.