I’ll be honest, I was expecting to write this post moaning and trying to find toddler appropriate alternatives for travelling well. However, O surprised us yet again and was very well behaved all in all.

We had to get up at a depressingly early time of 4:30 AM but from the get go O was well behaved, he sat and watched Peppa pig in silence whilst we got the last few bits ready for the taxis arrival at 5:30.

Once we got to the airport and had checked in it was all pretty much plain sailing. Oscar loved watching the planes take off and we brought some food to snack on whilst we waited. O also found it quite fun to run around the airport, and whilst I appreciate not everyone likes a child running around, tough cookies he had steam to burn before a 2 hour flight.

We got to the planes steps and took him out of his pushchair (turns out even though we had checked in online, we should have still checked the pushchair in separately 🤦‍♀️).

Finally sat in our designated seats with O in the middle we tried our best to explain to him about the seat belt and keeping his head back. I always give O credit where it is due, here for instance he not only sat back for take off, but left his seat belt on too for most the flight! 😱

How did I keep him occupied?

Well, simply, he had the IPad with downloaded episodes on both Disney life andAmazon prime video so he had plenty of options to switch between and change. He also had his juice, and some snacks. We learnt the snack trick from our train journeys. Basically, time goes quicker if your snacking, I mean that’s the main reason people snack isn’t it? Boredom and to pass time, not actually because they are hungry 😂. 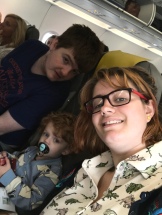 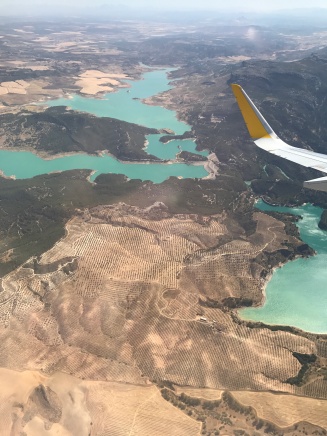 Now, he wasn’t perfect, he did kick the seat in front of him a few times leaving us telling him off, luckily though the lady occupying the seat was extremely kind about it and understanding. She even said to just leave him to do it. Naturally we didn’t as I want him to learn and it’s not comfy having the back of your set kicked when you just want to get comfy.

The only advice I can give is just make sure you take plenty to occupy them. Whether that be a film on an IPad or a book to look at or even a little car to drive on the food tray (yes we did that too). As long as they are kept occupied and belted in so they can’t figet and escape. It’s actually quite easy, you just need to be organised as prepared.

Lets hope he is as good when we fly to Tenerife in September. That will be harder, due to the luggage and the time restraint in catching the bus to a hotel after landing. But I still faith it is do able and not really as stressful as you are led to believe.

P.S hoping to post tomorrow about our time in Spain and the Cherry festival.